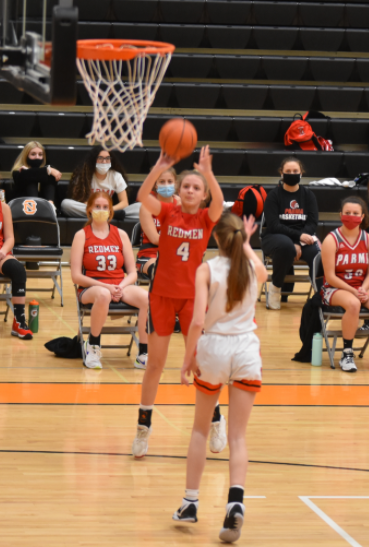 Parma Girls Basketball got to end their season this year with a non-conference matchup with the North Olmsted Eagles. Due to Covid-19 taking games away, the OHSAA allowed schools to continue to play games during the OHSAA playoffs and after being eliminated. The Redmen fell to the Eagles earlier this season 48-46 on a heartbreaking last second shot from the Eagles Jenna Cvijovic.

Parma got off to a slow start and was struggling to make shots despite the good looks that they were getting. Julia Basinger scored the first two buckets of the game to give Parma a quick 5-0 lead, but they were only able to score 2 points the rest of the frame. Despite their shooting woe’s Parma was able to be successful with their 2-2-1 press and their zone defense to hold the Eagles to only 6 points of their own.

The second quarter saw the shots start falling for Parma and Center, Lea Holmes, was able to finish some baskets in the paint to score 8 of her 13 points in the second quarter. Julia Basinger was also able to add another 7 points in the second to lead the Redmen in scoring at the half with 12 points. The Redmen took a 27-15 lead into the locker room at the half, which was eerily similar to the 27-17 lead they had in their first meeting.

The focus to start the second half was to not let up after the Redmen saw a 13 point late third quarter lead slip away in the first meeting. Amaris DeJesus was able to get herself to the free throw line going 5/6 from the line in the third and a pair of threes from Nevaeh Sawyer and Julia Basinger gave Parma the 43 to 26 lead heading into the 4th quarter.

This is when senior, Julia Basinger, couldn’t miss. She went 7/8 from the field and 5/6 from the three point line in the 4th quarter to finish with a game and career high 34 points. Julia hit three big 3 pointers in the first three possessions of the 4th quarter to give Parma the 26 point lead it would finish the game with.

Julia with her 8 made three pointers broke the school record of three pointers made in a game that stood at 7 when Elise Balcer hit that many three’s on her senior night in the 2018-2019 season. Julia finished the game 8/13 from behind the arc knocking down her shots at a 62% clip. Also, with her 8 made three pointers she finished her season with 40 which is good for a tie for 2nd most in school history in a season, only behind teammate Amaris DeJesus who made 48 this season.

Thank you to our seniors, Julia Basinger, Amaris DeJesus, Amanda Lee, Abby Leslie, and Cassidy Wellman for your dedication and commitment to this program. You have been a bright spot in a tough year. The Parma Girls Basketball Program wishes you the best of luck in your future endeavors and you have cemented your legacies in this programs history!