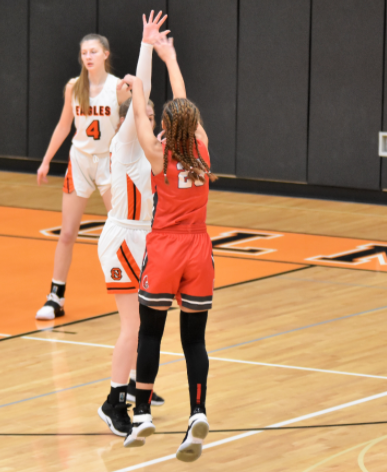 The Parma Girls Basketball team played host to GLC opponent Bay Village on Saturday morning in a game that saw the Lady Redmen get off to a hot start in the first few minutes of the game but were unable to sustain their defensive effort and offensive execution. Bay started knocking down outside shots and never looked back, beating Parma 68-34.

Senior Captain, Amaris DeJesus, was able to make history on Saturday afternoon as she has broken the school record for three pointers made in a career. On Wednesday evening vs. Buckeye Amaris was able to move into a tie with 2016 graduate Erin Bukach knocking down four triples and tying the career record of 87 career three pointers. Amaris was able to hit a three early in the second quarter against Bay to move a top the record books and added another in the third quarter for good measure. Amaris now holds the record to herself with 89 makes and will look to continue to extend that record as we move forward in our season.