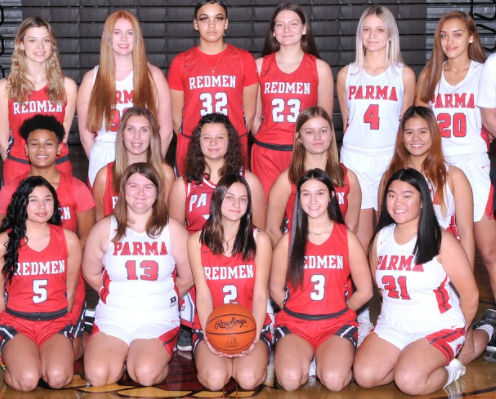 Parma Girls Basketball will advance on in the OHSAA Tournament after a 73-47 win over the Garfield Heights Bulldogs on Saturday afternoon. Parma got off to a slow start in the game and were down 11-10 at the end of the first quarter. The Redmen settled down in the second quarter and outscored the Bulldogs 25-7 to take a 35-18 lead into the locker room in the half. The second quarter was the highest scoring quarter of the season for the Redmen that saw them convert on 5 three pointers. Fr. Guard, Abby Basinger, played a pivotal role in getting the Redmen going in the second quarter when she scored 5 points, had 4 steals, and 3 assists in the one quarter alone. The other Fr. Guard for the Redmen, Nevaeh Sawyer, had a great second half scoring all 11 of her points in the second half and also finishing the game with 5 steals and 3 assists.

Our senior captain duo of Julia Basinger and Amaris DeJesus combined for 7 made three pointers on the day and 33 total points. Amaris led the Redmen in scoring with 24 points and picked up her fourth career double double with her 11 rebounds and 8 assists to go along with her 24 points.

The second half of the game the Redmen continued to play strong basketball and was a great opportunity for some of the Junior Varsity players who also dress Varsity to get some much needed experience. Sophomores Emma Basinger and Alyssa Reinel scored the first varsity points of their careers in the game. The Redmen finished the day with a 73-47 win over the Bulldogs.

The game also saw Senior Guard, Amaris DeJesus, break the school record of three pointers made in a season when her four three’s gave her 44 on the season, surpassing the old record of 40 made three’s.

The Redmen will be back in action on Wednesday as they travel to Brooklyn High School to take on the Hurricanes in a non-conference matchup at the JV and Varsity levels. The Redmen will then face Magnificat in the OHSAA Sectional Championship game on Thursday evening at Magnificat High School at 7:00PM.